At 90-years-old, Ernie Andrus decided to run across the country. He started touching the Pacific Ocean near San Diego, CA and made his way to St. Simmons Island, GA and the Atlantic. The total distance was 2,236.8 miles. It took him 999 hours, 32 minutes and 1 second over three years. To most people, this sounded crazy. To Ernie, it was just another adventure. Just like joining the Navy, bringing back the LST 325 as a pirate ship and running his fifth Ragnar Relay at Reebok Ragnar Del Sol. 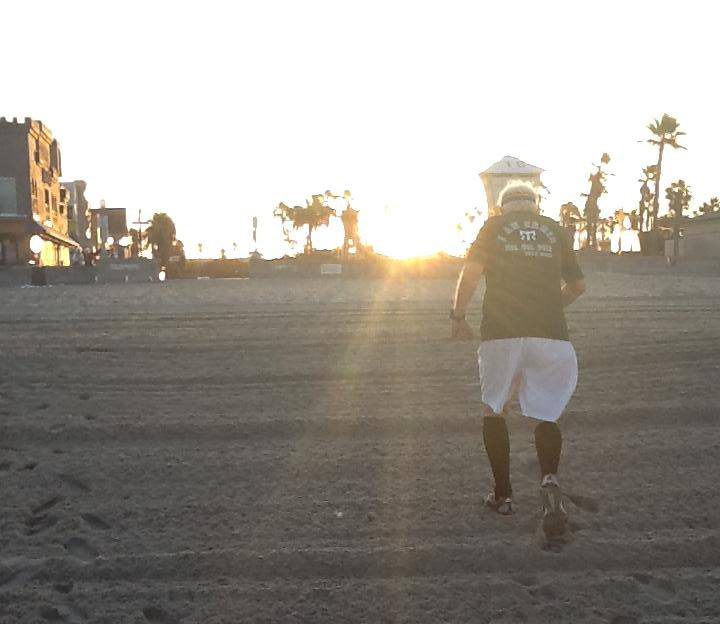 “My mother says I got on my feet at 8 months and I didn’t walk, I ran,” Ernie says. “I just ran everywhere. I married my second wife and she talked me into slowing down. Which was a mistake because for several years I didn’t run. I had to get back to running. Once I got back to running, I determined I was never going to get out of shape again. And I’ve just ran ever since.”

After running Ragnar, Ernie decided it was time to check another item off his bucket list.

“I did my first Ragnar when I was 88 years old and I got so much attention,” he says. “I figured if I got this much attention as an 88-year-old man running in a relay, how about a 90-year-old running coast to coast. So, I thought maybe I could raise some money for the ship.”

During World War II, Ernie served on the LST 124. The LST (Landing Ship Tank) was a ship designed to be able to land on shore and quickly unload armored vehicles and personnel. There were 1,051 LST class ships built during the war, making it the second-largest shipbuilding initiative in the history of Mankind.

“We’re proud of our LSTs and so were the people that built them,” says Ernie. “There were a lot of people that worked on building 1,051 of them. It’s important that the LST isn’t forgotten.”

But, after the war, many of the ships were taken apart. Ernie joined the National LST Association. The Association’s goal is to teach others about the role the LST had in the war. For 10 years, they searched for a boat they could bring back to the U.S. Finally, they found one in Greece. In 2000, at the age of 77, Ernie and several other veterans went to Greece to bring it back.

“A bunch of us went over there and spent about four months making it seaworthy and brought it back by its own power,” says Ernie. “They said it couldn’t be done. They said it was impossible and that you couldn’t take an old ship like that across the Atlantic. The Coast Guard in Greece said you’re all going to die out there. It would take at least 44 young strong men. We did it with 28 old men. The Coast Guard advised us not to, but they had no authority over us. And the state department refused to let us go, so we sailed as a pirate ship. We left as crazy old men, but when we got to Mobile, Alabama, we were heroes.”

By running across the country, Ernie raised funds to help keep the ship in working order. The ship now spends most of its time docked in Evansville, Indiana but will visit other ports around the U.S.

“It really gets your heart good when you see guys come on board who haven’t seen it since the war,” Ernie says.

“Ragnars are the most fun,” he says. “It’s like a party. Everyone’s just enjoying themselves. It’s the atmosphere and the challenge.”

He still runs three days a week. And he doesn’t plan on stopping anytime soon.

“I’m going to keep running as long as I can,” he says.

So, just like he signed up for the Navy, sailed across Atlantic, joined a Ragnar Relay team and ran across the country he’ll embark on yet another adventure: running another Ragnar Del Sol.